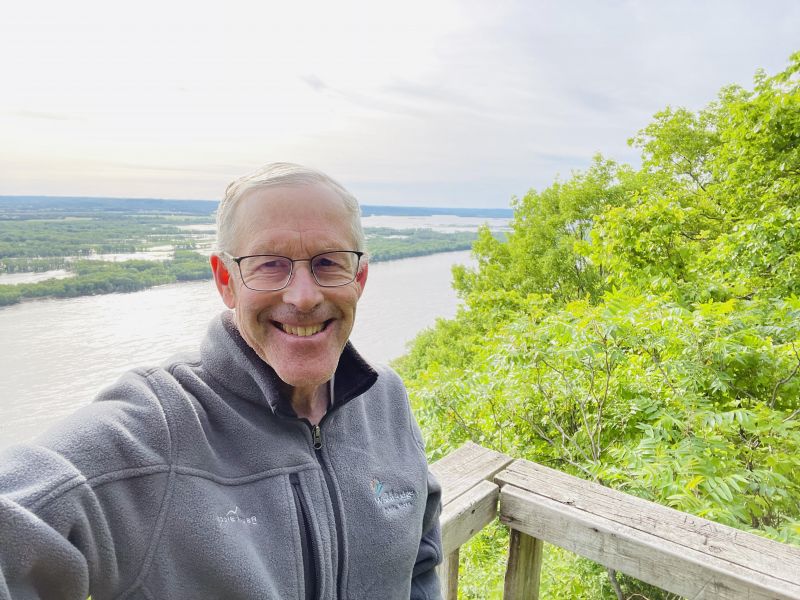 Scott Brink is a Busy Bee volunteer at Crescent Cove, keeping the Home clean and tidy when he volunteers every week. He is quick to greet families and staff with a smile that makes his eyes twinkle.

Scott’s first volunteer experience with Crescent Cove was with the American Public Works Association which organized a group activity doing plantings and landscaping around the home. The minute he arrived Scott instantly recognized the home from when he worked for the City of Brooklyn Center as a civil engineer in the 1990s! Once he learned that the site is now the home of Crescent Cove and about our mission, he vowed to return some day as a frequent volunteer.

Helping others comes naturally to Scott. During his career as a civil engineer in both Minnesota and Colorado he worked in the public sector to help cities solve problems, improving public safety and quality of life for residents. He also volunteered in developing countries through Engineers Without Borders, bringing those same skills to developing countries.

He also knows something about supporting families through medical challenges. He himself underwent treatment for cancer some years ago and went to the Mayo Clinic for a bone marrow transplant. While in Rochester he became connected to a group that supports children with cancer and their families.

“The courage, resiliency, and love that I witnessed from that made my own struggle seem benign in comparison. During and after my experience in Rochester, I vowed that I would devote more of my life to helping children in some capacity,” Scott says.

Scott retired recently which is when he began his volunteerism at Crescent Cove. “Slowing down, appreciating life more, and being grateful is part of the process of adjusting to retirement,” Scott says. He enjoys being outdoors, hiking, biking, kayaking, skiing, snowshoeing and camping, and enjoys spending time with his adult daughters and his cat, Ruthie.

Of his time at Crescent Cove, Scott says, “There is no other place I am aware of that provides this kind of unique service which makes such a huge positive difference in the lives of children and families. It’s such a positive community and is a joy to be around.”

We are so grateful for all you do, Scott, to support the families of Crescent Cove!

Interested in volunteering? Learn more here and fill out our volunteer interest form.